Torque curve is the main tool to analyze and study any assembly in detail.

The torque curve is obtained by registering the torque values at each angle or time increment during the fully threading of the screw until its failure.

By analyzing the torque curve, our application engineers infer a considerable amount of valuable information for our customers on the performance of the screw at that particular assembly. The main data obtained are as follows:

To make the most out of this test, adequate knowledge and proper understanding of the information provided by the torque curve are required.

The curve below depicted corresponds to tightening of REMFORM® screw diameter 6 on PBT+30GF plastic part. 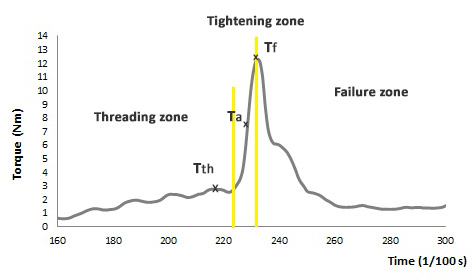 Threading zone: corresponds to torque and angle values until the head of the screw touches the cover part. The following parameters are to be considered:

Tightening zone: this value corresponds to torque and angle values just from the moment the clamp load starts until the assembly fails.

The stability of the assembly is determined by the difference between threading torque and failure torque.